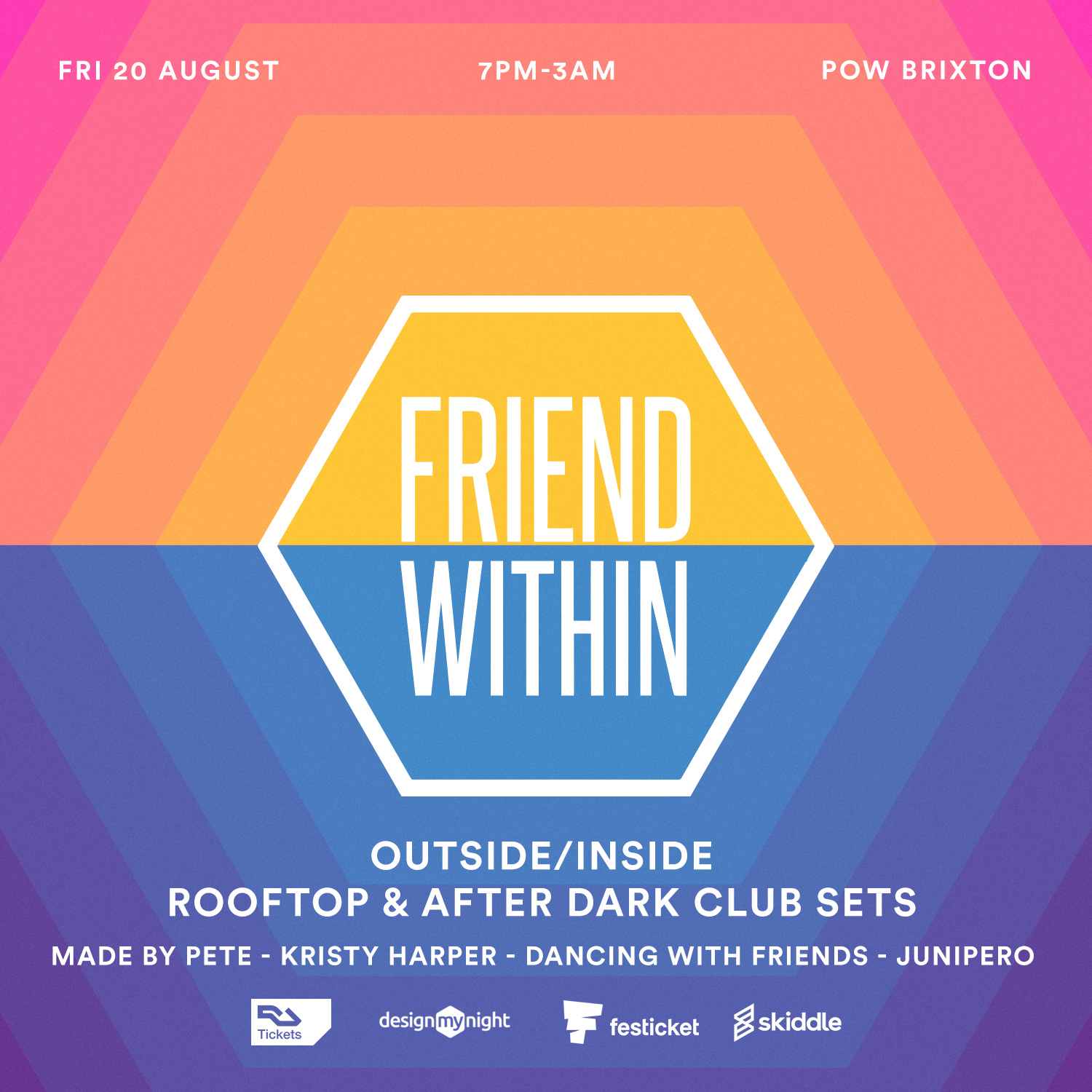 Friend Within heads to The POW, one of London’s finest rooftop venues, playing both on the iconic Brixton rooftop, as well in the newly refurbished club room after dark.

With releases on Toolroom, DFTD, Rinse, Dirtybird, PETS, Hypercolour, Method Records, a Radio 1 Essential Mix, diverse DJ support from the likes Pete Tong, MistaJam, Derrick Carter, Annie Mac, Oliver Heldens, Eats Everything and Carl Cox, plus a wealth of remixes, Friend Within is a ‘producer’s’ producer, consistently delivering what is technically known as ‘bangers’ from early EP’s such as The ‘Renegade EP’ to the twisted Hypercolour release ‘The Underground EP’.

A notable collaboration with Disclosure on ‘The Mechanism’ soon followed and supporting them on their biggest ever UK headline show. With further support coming from a huge range of publications, Friend Within started his has his own label, ‘He Loves You’, self-releasing his blurring take on house music.

With a diary that has covered The Warehouse Project, Chibuku, XOYO, We Are FSTVL, Creamfields, Parklife, Fabric & European cities and festivals, Friend Within has also demonstrated his massively rising popularity with tours of Australia and the USA. Counting performances on the heralded party that is The Holy Ship! and Mexico’s EDC festival.

2018’s ‘Make Me Feel’ (Dirtybird),the quirky ’Get Dumb’ (DFTD) and ‘Burnin’ Up’ with Kideko (Rinse) gained huge support at Radio 1, eventually making its way to the Radio 1 daytime Playlist.

Regular releases on Toolroom Records, including ‘Lonely’ and ‘The Truth’, have become firm faves of Calvin Harris to name a few.

Support comes from Made By Pete, whose recent work has been snapped up by taste-making labels like Crosstown Rebels, DFTD and MadTech Records

Kristy Harper also joins us, with her regular Netil Radio show and appearances at clubs and festivals across Europe and Asia such as Magnetic Fields, Snowbombing, Houghton and Love International, guest mixes for Slothboogie, Zeezout and Red Light Radio and regular all night long vinyl sets at the legendary Brilliant Corners, it’s great to have her along for her first outing at The POW.

Regulars Dancing with Friends warm up the rooftop, whilst Junipero return to host the Hotel Room!