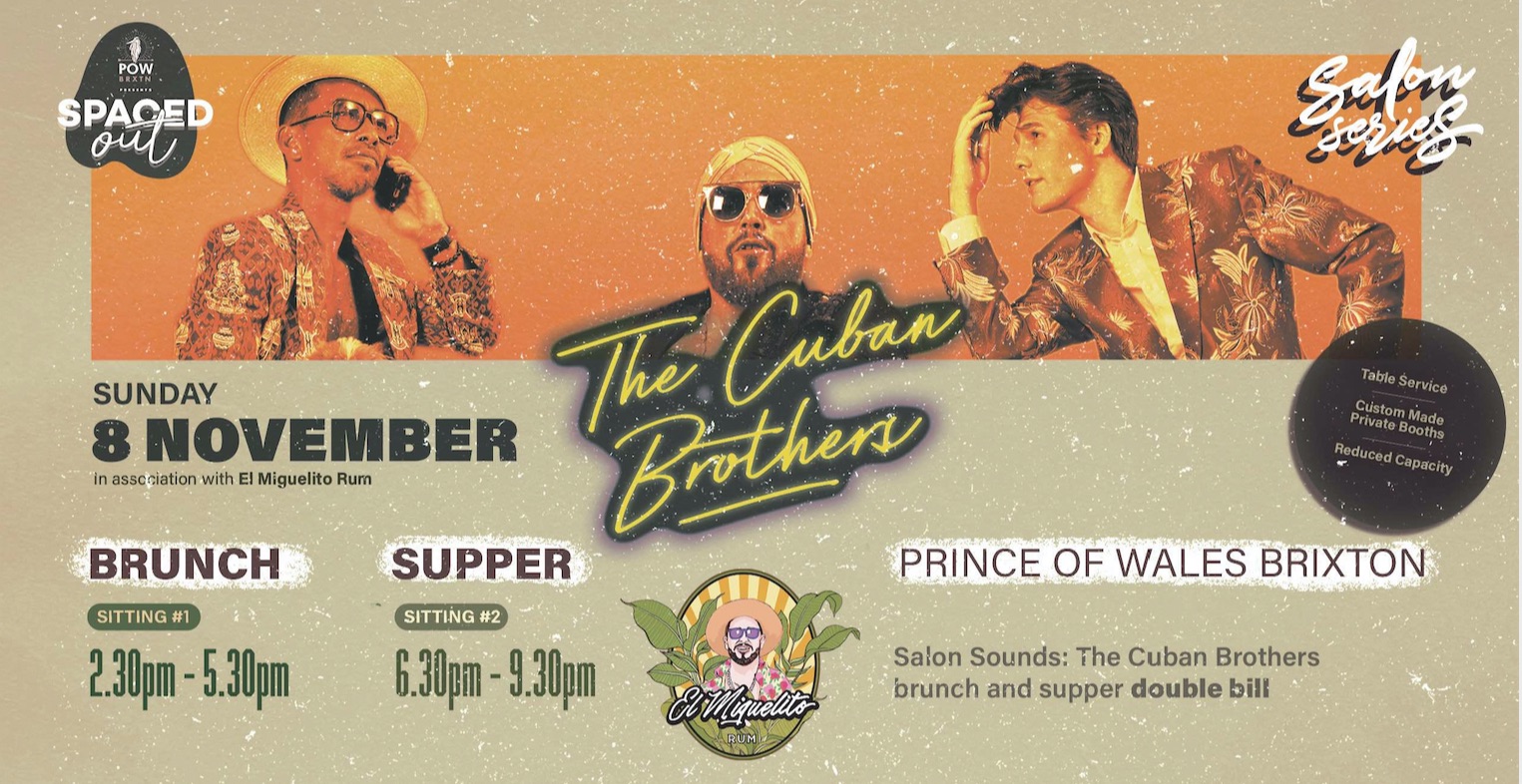 It’s a pleasure to be welcoming legendary outfit The Cuban Brothers to Brixton, as part of our ‘Spaced Out’ series, our very successful, socially distanced event series enjoyed with food and drinks from the comfort and safety of your own custom made party booth.

These sessions take place in our newly built intimate indoor Salon, relax and enjoy yourself in one of our newly installed booths.

Tickets start at £25 per person (including your choice of meal and first drink), grab your bubble and get down!

Read more about what we are doing to keep you safe here – https://pow-london.com/covid-health-and-safety/

Indoors events must only be attended with members of the same household.

We will have to have a minimum of 4 per booth and a maximum of 6 to keep the average attendance up for each seating.

Customers will therefore have to buy group tickets, of 4, 5 or 6 – no individual tickets. We encourage you to try and gather a group of 6 so we can maximise the number of seats utilised at the venue.

Guests should arrive 15 minutes early to their slot. If people are late they may lose their table!

About The Cuban Brothers:

Sold out tours, festival spots and support slots for rock royalty to crazy club nights, film roles and fashion shows, The Cuban Brothers’ unparalleled act is ingrained in pop culture. Two decades since their inception, Miguel and his suspect sidekicks are renowned the world over for their party starting skills, risqué sketches, Bboy moves and funk fuelled music. Everywhere from the Far East to South America, from Brisbane to Bahrain, from the Gumball rally to the F1 circuit has fallen for the Hawaiian suit sporting crew and their outrageous, X rated antics.

The Cuban Brothers may be a comedy act, but they’re simultaneously serious musicians who have played with Prince, been on the road with James Brown and supported Fatboy Slim, Chuck Berry and De La Soul. In 2018 they celebrated their 20th Anniversary with a special tour of the Scottish Highlands & Islands where it all began and the release of their latest compilation ’La Familia’ featuring one new Cubans track I Hate Hate alongside classics by Herbie Hancock, Children Of Zeus and D’Angelo. Their act of skits and stories between soul, funk and hip hop songs, with Miguel freestyling and the trio breakdancing took off at a student night which always sold out. At the Edinburgh Festival, a late night residency at the Gilded Balloon became a love in for upcoming comedians, among them Sasha Baron Cohen as Ali G, Dara O Briain, Andrew Maxwell and Ed Byrne. Within months of becoming The Cuban Brothers, they were offered a residency in Amsterdam and another at the legendary Manumission in Ibiza. In south London,Rob Da Bank made them a staple of his Sunday Best parties and word quickly spread. The band’s private party work exploded early on and hasn’t stopped since – everyone from Elton John, Robbie Williams and Richard Branson to Davina McCall have called on the Cubans to sprinkle their magic. Russian oligarchs have hired them to entertain their wives. The late Supreme Leader Kim Jong-il flew them to North Korea to perform for his cabinet and kept them captive for days. Last year, they hosted Noel Gallagher’s 50th birthday party after the singer declared them the best act at Glastonbury.

A Cuban Brothers sketch show is in the pipeline, and after 20 barely believable years, Miguel and his sidekicks remain unrivalled party starters still finding new fans all over the globe.